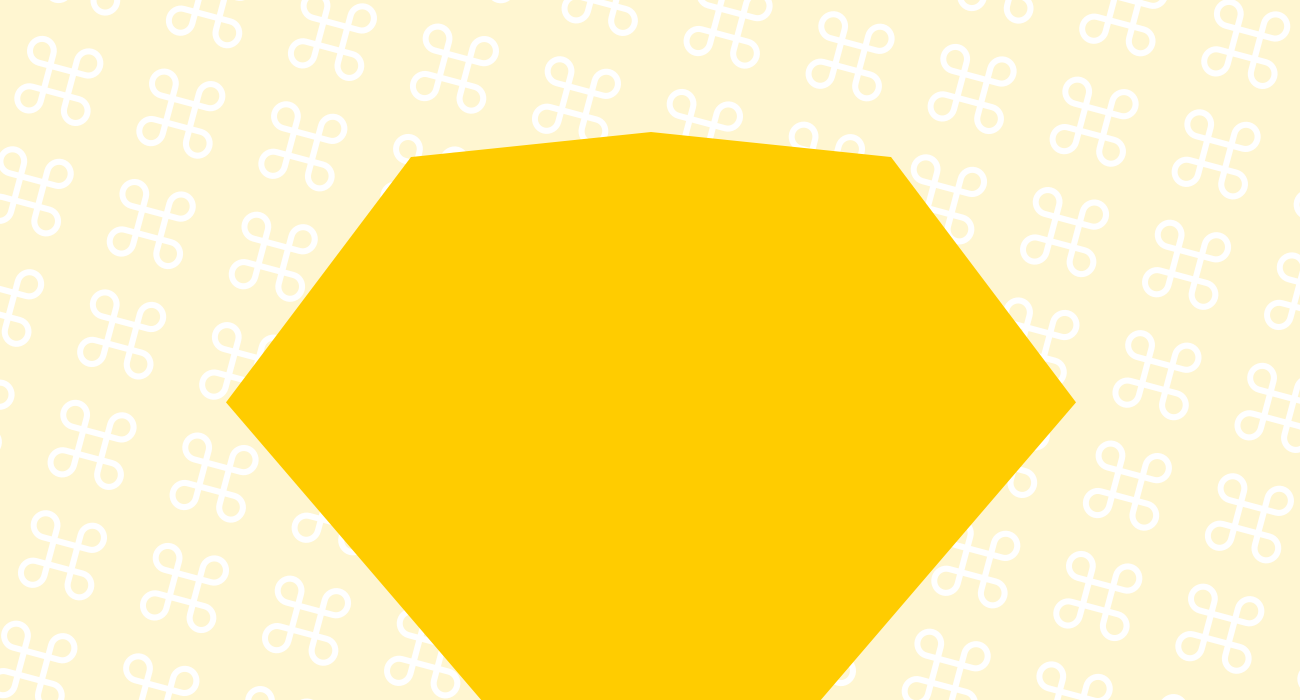 Whether you’re a total novice, a designer in training, or a seasoned pro switching from another product, this article is for you.

First, we’ll introduce Sketch—what it is, why it’s popular, and how to claim a free trial and install it on your Mac. Second, we’ll explore Sketch’s user interface, explain the basics, and walk you through some tips and tutorials. Third, we’ll take a look at some of the app’s more advanced features (Bézier curves and blending modes are especially fun).

And finally, we’ll point you to a heap of quality Sketch resources, and link you to our free 99-point Sketch Cheat Sheet to download and refer to as you learn. Sound good? 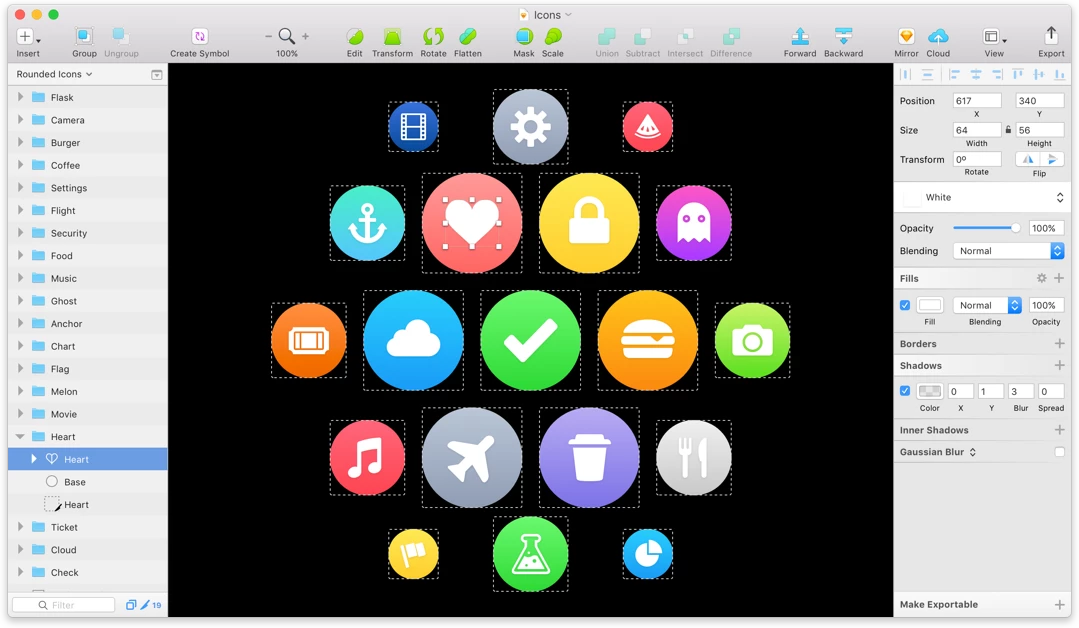 For a while after its initial release in 2010, Sketch was regarded as a lightweight graphics tool that enabled user interface (UI) and user experience (UX) designers to quickly mock-up app designs.

But Sketch has come a long way in the past few years—and its capabilities now extend far beyond creating screen mockups. As a young product built for today’s needs, it doesn’t have any of the bulk that comes with the legacy compatibility demanded of Adobe’s Creative Cloud suite of products. (See our Sketch vs Illustrator article for more about that.)

Sketch is now proudly marketed to visual, mobile, icon, web, and product designers—and I think it’s only a matter of time until its developers, Bohemian Coding, are confident enough to pitch the software to illustrators and artists as well.

Sketch is one of a group of programs called vector-based graphics editors. Other well known vector-based apps include Adobe Illustrator, CorelDRAW, and OpenOffice Draw.

A vector editor is different from the other main kind of graphics package, which is known as a pixel or raster editor. In a pixel graphics editor (like Adobe Photoshop, GIMP, or Microsoft Paint), when you draw a shape, what gets saved is just a lot of pixel data, which looks like a circle from a distance: 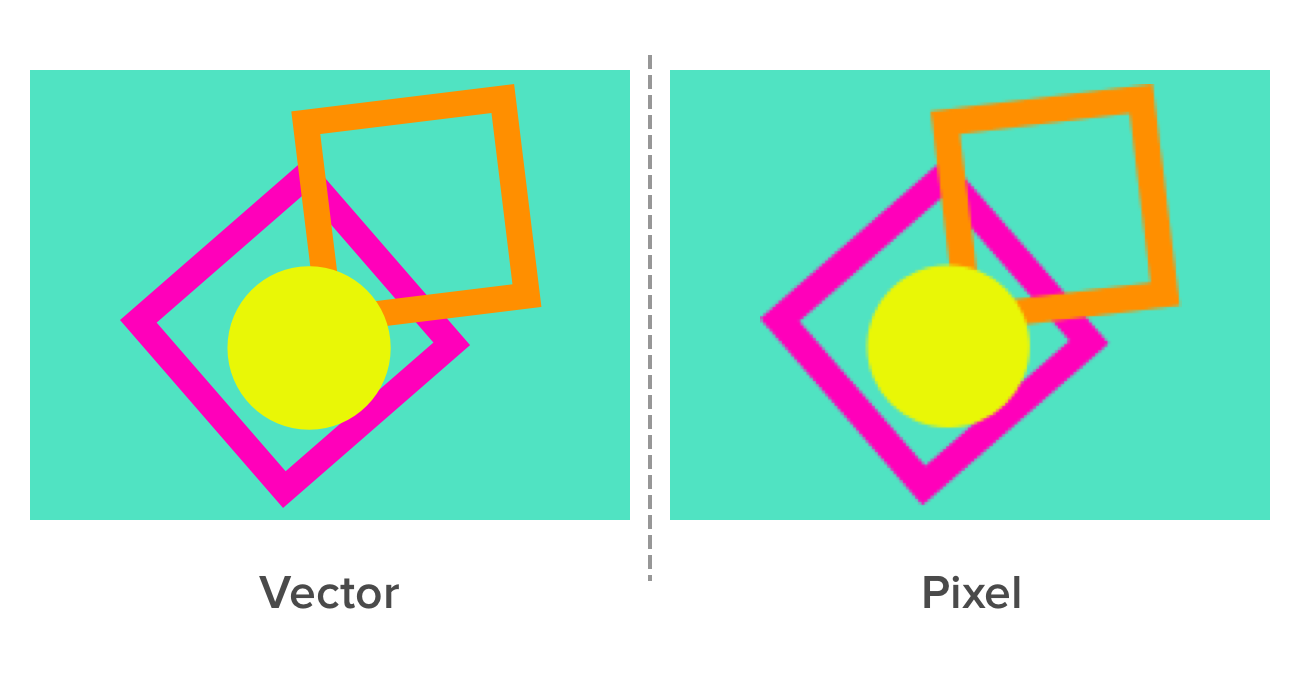 But in a vector-based package like Sketch, what gets saved is some mathematical cleverness that plots the shape itself. In practice, this means that you can keep zooming in to a vector forever and you will never see any degradation in image quality. Designers and illustrators usually prefer to work with vectors, because they can always be converted to pixels. It’s much harder to go the other way. 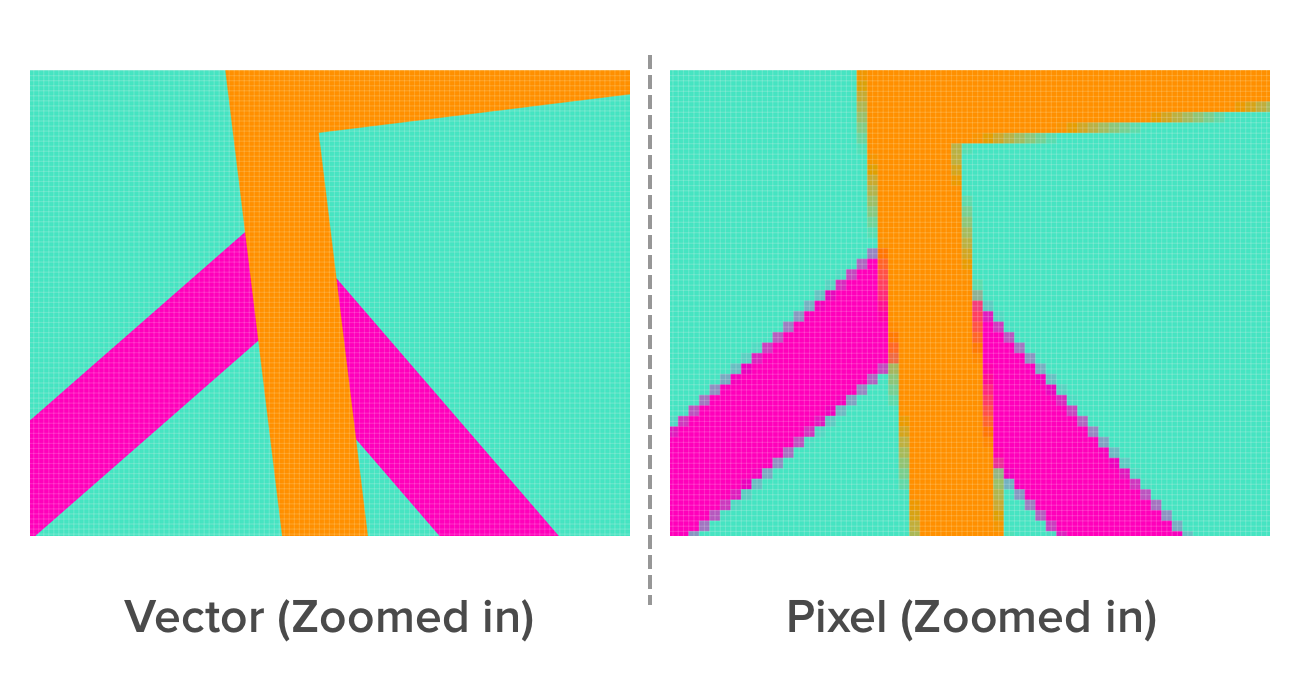 In Sketch, unless you paste in pixel graphics like a photograph, all layers are vector-based. Every object is made up of underlying points and curves, which can be viewed and edited by double clicking on any shape. But we’ll come back to that later!

Sketch has become a significantly more mature and stable product over the past 12 months. For an app that’s less than 50 megabytes in size, Sketch punches significantly above its weight, and it now has a premium feel that far exceeds its price tag ($99 full price, $49 for students). For comparison, Adobe Illustrator CC is currently hogging over 1000 megabytes of my hard drive. 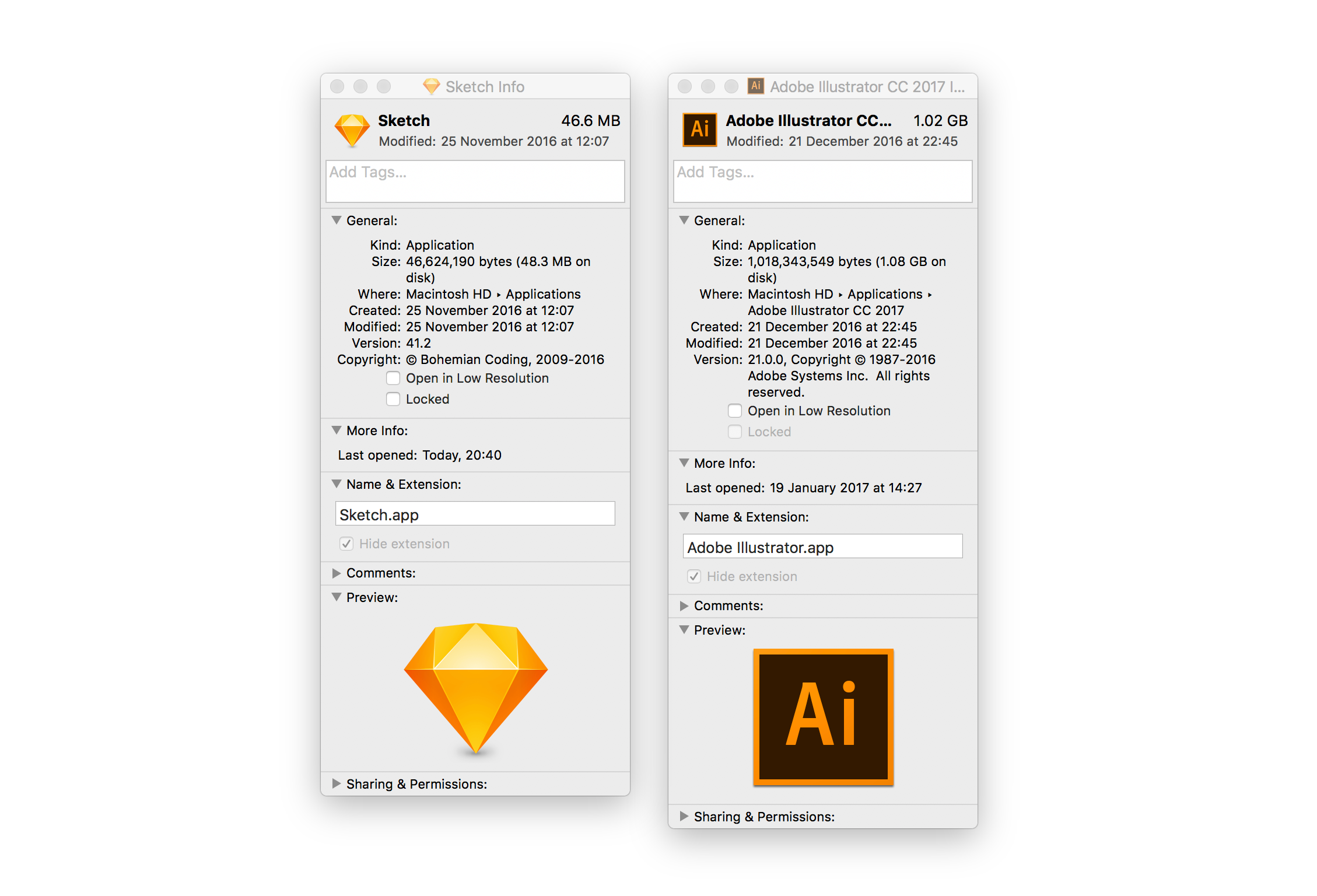 What’s more, Bohemian Coding’s ongoing program of software enhancements means that when there are bugs, they are fixed pretty fast. (If you’re geeky like me, you can check out the update log.)

Sketch’s established rival, Adobe Illustrator, was first released in 1987 (!) and remains the industry standard in traditional design studios. But for a new generation of designers, Sketch presents a huge opportunity to learn the fundamentals and achieve beautiful results.

Learning design in Sketch is rapid, rewarding—and fun. Designer Marc Andrew has even written about how Sketch gave him back him design mojo.

2. Getting Started in Sketch

First, get a copy of Sketch

If you’re brand new to Sketch, check out the Getting Started page on the Sketch site. Sketch will run on any Mac with OS X El Capitan (10.11) or higher, and you can download a 30-day free trial.

Then, find your way around the interface

When you’re working in Sketch, you’ll spend most of your time looking at a screen like this. Here’s a screenshot labelled with the basic areas of the interface and what each one does.

Here’s a more detailed explanation of the function of each area:

Next, get familiar with some important commands

When you first open Sketch, you’ll have a blank canvas. The first thing you’ll want to do is to create an artboard, which will keep your designs organized. You can have as many artboards as you want on a single page.

To create a new artboard, click “Insert” on the Toolbar, then select “Artboard”, and click and drag out a rectangle on the canvas. Alternatively, just press “A” on your keyboard, and then click and drag.

The simplest way to start drawing shapes is to use these simple keyboard shortcuts. (Don’t forget, there’s a cheat sheet of 100+ shortcuts for you to download below!)

You can access more preset shapes, like star, polygon, and triangle, by clicking the “Insert” button on the Toolbar. Here I am creating a star:

When I first started using Sketch, I fell in love with the alignment and distribution buttons that live at the top of the Inspector panel. Here’s what they do:

These commands have two crucial functions. First, they help you to work efficiently, because you can quickly create a bunch of objects and then line them up and space them out evenly with a couple of clicks. No more desperately trying to drag something to an exact pixel position! And second, they help you to clean up a composition towards the end of the design process, because you can easily ensure that key elements are positioned and spaced consistently, and that everything is sitting where it should be.

Here’s an example of how to use the “Align left” button:

It’s easy to duplicate layers and artboards in Sketch. Right click any object and click “Duplicate” to create another copy on top. Alternatively, just select an object and press command + D, or just hold down alt and then drag the object you want to copy. Here’s me duplicating my little star:

Duplicating artboards is also essential to maintaining an efficient workflow. By duplicating an artboard after each significant change, it’s easy to go back to an earlier version without having to click “Undo” a bajillion times: 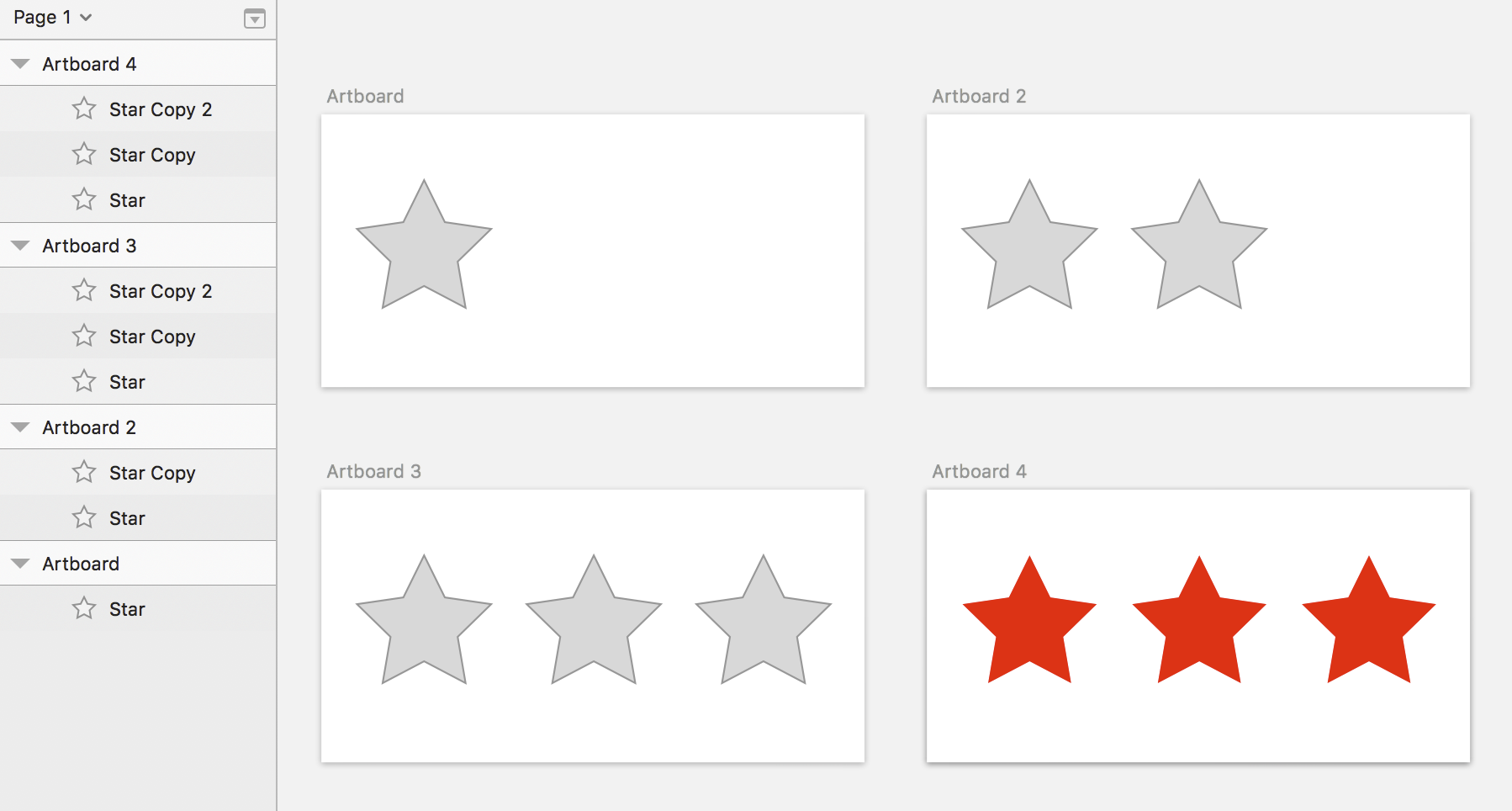 For more introductory tips like these, check out our series of Sketch Tips to Enhance Your Productivity, which cover the following topics:

And finally… work through these Sketch tutorials

Level Up Tutorials have a great series of 5-10 minute Sketch video tutorials. When I first started learning Sketch I worked through all of them, taking notes along the way, or pausing the video to try things out. It boosted my confidence, and also enabled me to work more quickly than if I’d tried to learn everything without help.

For even more tips and tutorials to help you get started in Sketch, see the “Further Resources” section towards the end of this article.

Once you’re up to speed on the basics, it’s time to explore some of the more advanced features available to you as a Sketch user!

As I mentioned earlier, Sketch is a vector graphics editor, which means that all objects in Sketch are made up of points and curves. To get the most value from Sketch, you need to master how to control and manipulate those points and curves. Doing so will also enable you to draw your own complex shapes, like letterforms, from scratch.

Peter Nowell has written an awesome article about how to master the Bézier curve. He sets out some important common sense workflow principles, explains the difference between straight, mirrored, asymmetric, and disconnected handles, and offers practical tips for how to work with the vector tool in Sketch. Go check it out!

Sketch allows you to create your own “symbols”. This means that you can save a layer or a group as a symbol that you can then insert into your document as if it was an ordinary shape.

What makes symbols special is that you can double click an “instance” of a symbol, make a change to the “master” symbol, and all instances of that symbol in your document will be updated to match. Here’s a GIF of me creating a leaf-shaped symbol, inserting 2 more instances of it, and then changing the opacity of the master symbol. Notice how the others get updated too:

When you’re working with grouped objects, you might want objects within the group to behave differently when resized. For each object inside a group, Sketch allows you to choose which resizing method it should use. 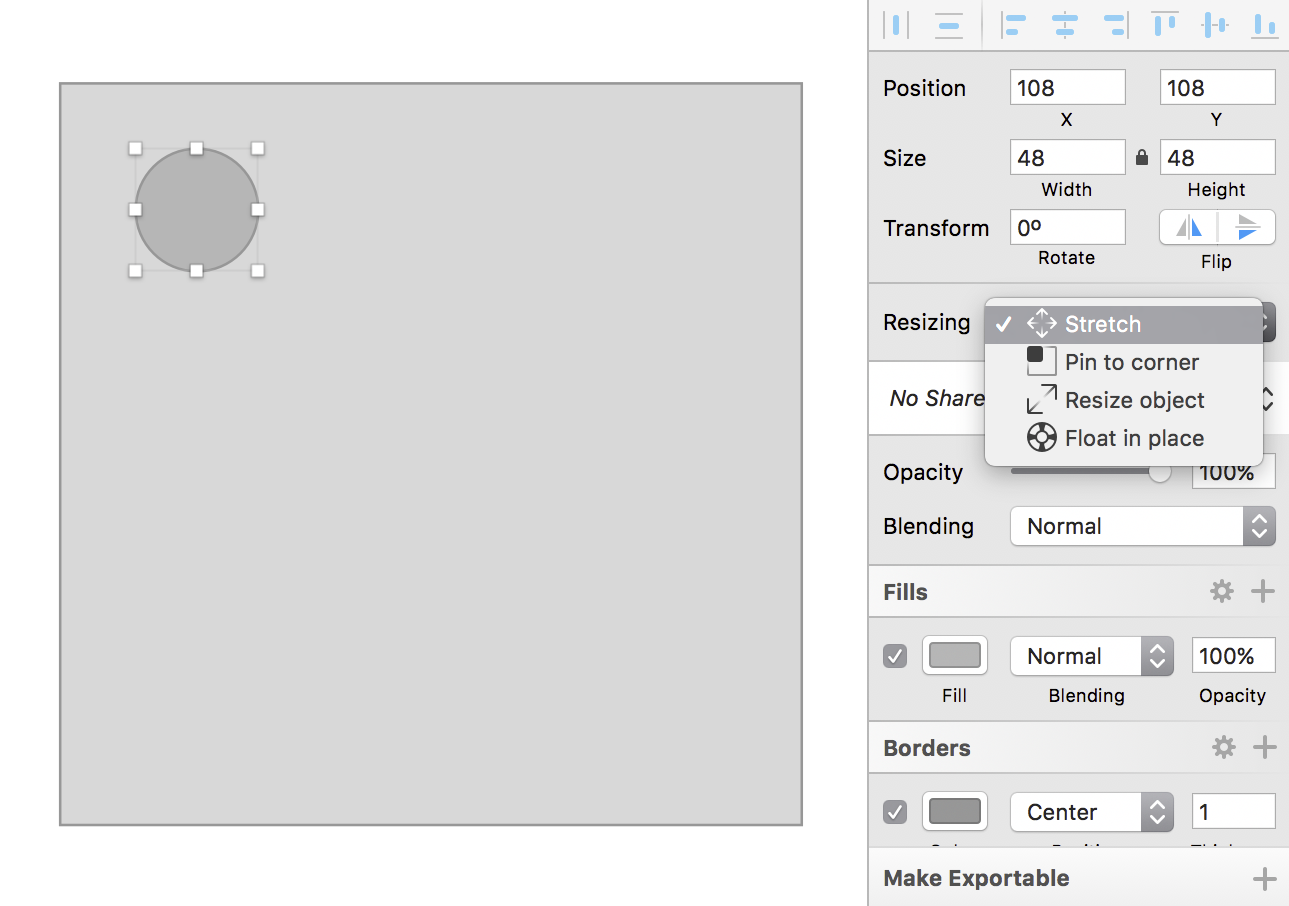 Here are the options:

See here for more about group and symbol resizing.

A blending mode is a setting that determines how the colors of one layer interact with the layers underneath it. Sketch currently offers 15 different blending modes. If you’re a Photoshop user, you’ll probably be familiar with some of these already. For an explanation of what each one does, and how to create awesome effects using blending modes alone, read this nicely illustrated article by Mauricio Uehara.

Use Sketch for Print Design!

Especially for those who find they work more quickly and productively in Sketch, it can make sense to prepare print documents there rather than in a print-specific package like Adobe InDesign. In another awesome article, Peter Nowell explains how to use Illustrator to prepare a PDF that was made in Sketch for print.

Try out your skills with some mini-projects

You’ve read this far, so why not try out your new skills by attempting to reproduce a couple of mini-projects in Sketch? Start with an easy one by recreating the Google Docs icon. Then try something more advanced—my favorites are this simple illustration of a prescription bottle and a Dribbble-inspired ice cream.

As a Designlab student, you can get 50% off a Sketch license. Designlab is not a paid promoter of Sketch, and we don’t receive anything when you purchase a license. We recommend it because we genuinely believe it is the best choice for our students and a great match for our model of design education. 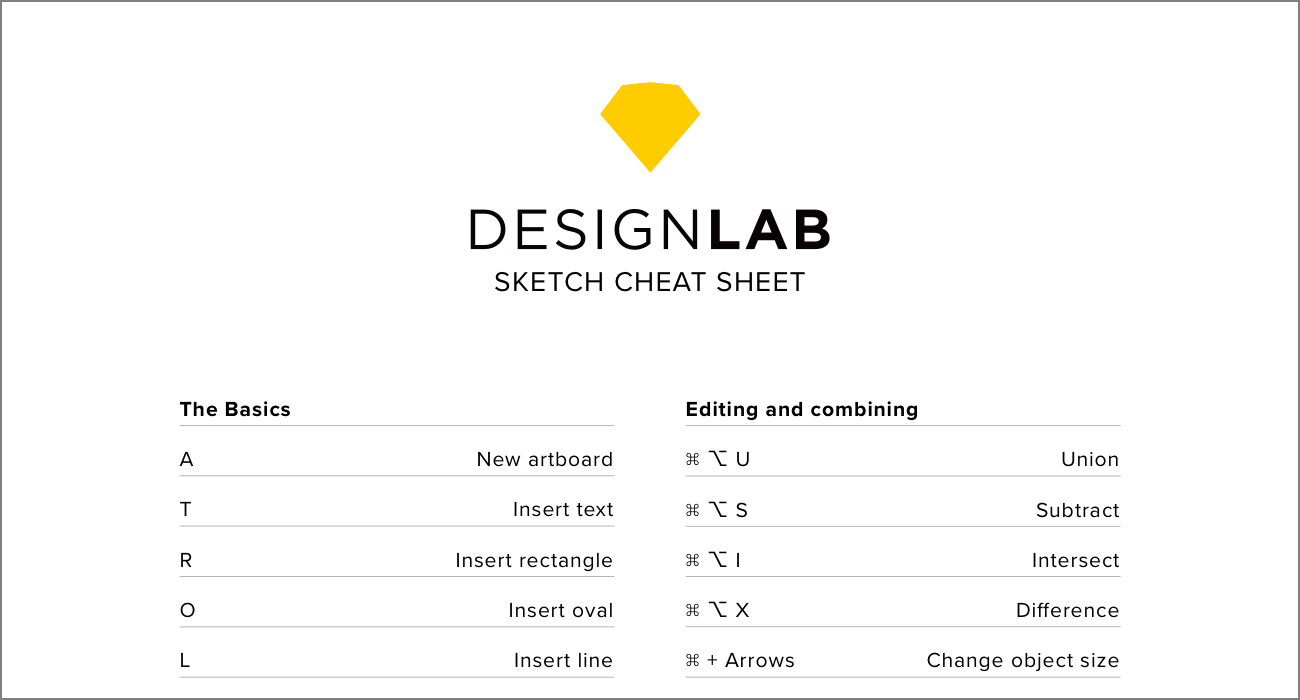 If you’ve found this article useful, why not download our 99-Point Sketch Cheat Sheet? It’s a PDF, designed to be saved to your desktop for quick reference, or printed out and stuck on the wall above your monitor.

Let us know how you’re getting on with Sketch in the comments. Happy designing!

We offer a range of design short courses as well as an advanced UX Academy program.

Working 1-on-1 with an expert design mentor, students receive feedback on a portfolio of UX projects through a dedicated online platform, community critique sessions, and video calls. Find out more!​

Starting Out In The Design Industry
Success Stories

Words of Wisdom from Women in Tech
Changing Careers

Are Notifications A Dark Pattern?
Viewpoints
Go to blog homepage